I was first introduced to the hobby of homebrewing earlier this year and had no idea what the hell I was doing. I watched people make it and even researched the basics of brewing your own beer. It seemed easy, so I went ahead and purchased a basic equipment kit along with an Amercian Amber ale kit. Lets just say that my first experience in homebrewing was actually my most successful to date as you will find out in this post along with future postings.

After my first kit was brewed, fermented, bottle conditioned, and taste tested I figured it was time to get something else going. As you may know, homebrew kits are fairly pricey and I was looking for something a little on the cheap side…that’s when I came across a simple mead recipe in a home brewing catalog. Simple…very nice! So I ordered up the ingredients (I can’t find the recipe so I don’t know how much of what went into this) and bought three pounds of honey from a local beekeep because I was only going to make one gallon of the stuff. Wise decision on my part.

Having the ingredients in hand, I got down to business. I dissolved the honey in the water and tossed in the other ingredients minus the yeast. I let the concoction of water, honey, and other ingredients cool before I added the yeast and once that was done all I could do was sit back and wait anxiously. The mead started fermenting and seemed like it might never stop. After two weeks it was still bubbling out of the airlock. What the hell, I thought to myself…the recipe claimed it would slow significantly at two weeks and then I could go on with the recipe. Not mine, it just kept going and going.

When it finally did stop bubbling out of the airlock I racked it for the first time, stabilized it with potassium sorbate, and added yet another cup of honey to hopefully sweeten the ‘Viking drink’ out. Then it was more waiting. About a month later, give or take a few, I racked it yet again to rid of any sediment left floating around and continued to let it sit in the one gallon glass carboy for another week or so before bottling. When bottling finally came I had my four wine bottles ready and an abundance of corks because I could only buy a minimum of twenty-five. I was excited…the mead looked good and smelled alright but I just figured it needed some time alone to come together and become a most righteous drink.

Bottling was just as easy and making the mead itself. I siphoned the mead into four wine bottles and corked them with a handcorker…which is simpler to use than you read about. Now it was time to sit back and let my mead age. I had never tried mead up until this point and I was looking forward to the day I could finally try it. As it aged I continually checked on it. What I was looking for is beyond me but I went ahead and did it anyways. As it aged a bit longer I checked on it less and less but still checked on it from time to time.

I figured that by the time October came around this sweet elixir would be ready to test…it was just a matter of when to bust it out. My buddy, Ian, was set to have a Halloween party on the 29th of October and I decided that this would be the best time to crack open a bottle and sample it. People would be there and I would be praised for the intensive labor I put into this mead. Well the time finally came and I showed up to the party dressed as a pirate with a bottle of mead in hand best site. We chilled it prior to sampling and then I saw Ian take the bottle out, open it up, pour a glass, take a sip, and then hand it to me…

I saw no reaction on his face whatsoever so I figured it couldn’t be all that bad. Then I took my sip…huh?!, not what I expected at all. Not sweet enough and it had the overpowering taste of too much alcohol in it. Not a bad thing, because there is never too much alcohol, but it overpowered what I thought would be the pleasantly sweet taste of honey. It was an experiment that I just had to try and I learned that when a recipe says to stabilize after two weeks you should probably just do it because that honey will just continue to ferment and ferment. That and next time I need to sweeten with a lot more honey.

All in all it was a great experience and I look forward to making my next mead…I still have two bottles of this mead left and I’m hoping that it only gets better as it ages. I guess we will just have to wait and see. 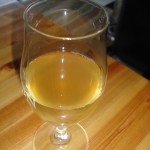